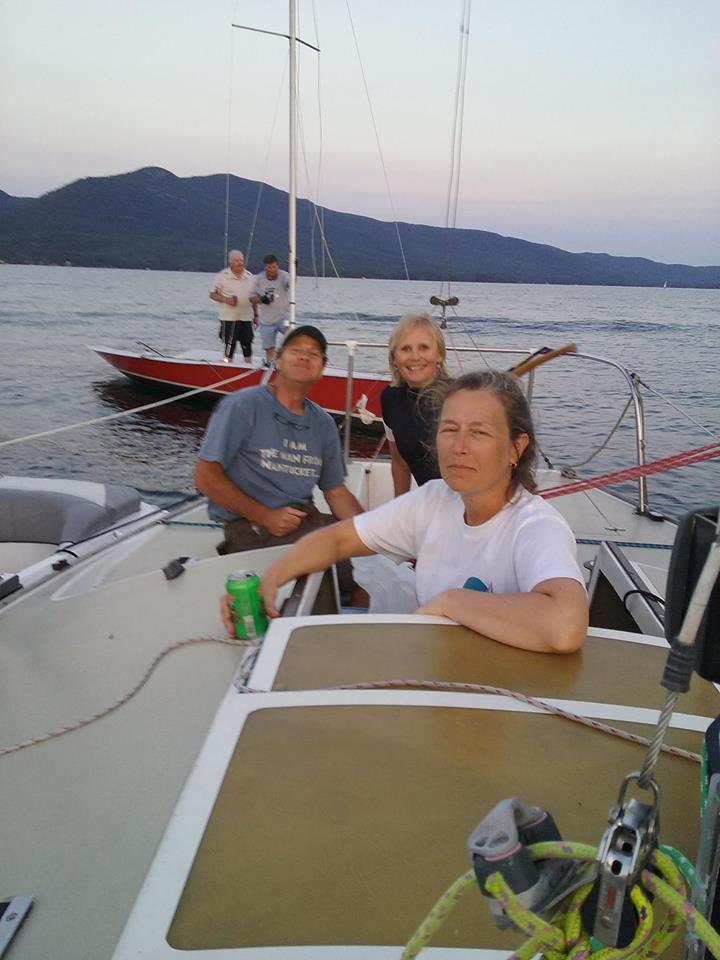 Lake George provided yet another opportunity to test both the competitors and the RC with circling winds. 15 boats came out to race on a very comfortable evening. Welcome to Rik and the crew of Brass Ring and the crew from Y-Knot, sailing a Sonar!

The initial I5 course set in SE winds had to be changed as the competitors closed on the starting area. A 60° shift to the south left the RC with little choice but to start the fleet and make needed changes during the first leg. The racers worked their way toward Hogback in a steady 6-knot breeze. Most opted to go east initially. Vaporize, Witch Way and Wild Thing were leading the pack as they headed back “up” the lake towards Cotton Point government mark. The wind continued to go west as the fleet as reached for the leeward mark. Then all were forced to drop their spinnakers and resort to headsails for a beat to Cotton Pt in the last ¼ of the leg with winds dropping dramatically.

Vaporize seemed to stop on the western side of the course while Wild Thing was moving steadily on the eastern side. Then it changed again, Vaporize caught a lift and led the way around Cotton Point, completing the second leg. During that second leg, the RC dropped a mark to the east of Cotton Point in an effort to keep the course square and then retrieved the original marks and got back to Cotton Point to communicate the course change with multiple sounds, C flag, red flag to indicate the course had been changed to port, and a radio broadcast of new heading.

The wind increased again and the fleet got their spinnakers flying once again. With a slight reordering at the rounding, the lead boats headed back to Cotton Point where the RC was anchored on what was to be the final leg. As the lead boats approached the committee boat a shortened course was communicated and Vaporize led the way across the line sticking to a northerly route. Meanwhile Spirit passed Witch Way and Wild Thing on the southerly side. Uncle Ludwig and Cut Loose edged out the two sport boats for third and fourth, respectively, for the evening. The raft up after the race was graced by a beautiful full moon cresting Pilot Knob just after dark.