One of those scattered and isolated non-severe thunderstorms rolled right over Yankee approximately 15 minutes into last night’s race. The race was abandoned and most sailors made it back to the docks before being rained on. The storm lasted for about an hour. The raft-up will be held next week, weather permitting.

We’ll try to get two 45-minute races off during July to make up the race. RC will communicate on the Monday morning prior to the race based on the long-range forecast.

Last evening the committee boat set up a W course in steady 4-5 knot EAST winds and “chilled out” for 45 minutes in the 91F heat while 11 boats rigged and came out to the race area. A W6 course was communicated, with the intention of shortening the course if needed. The windward tetrahedron was set north of Long Island at 142o. I would like to thank Alfie for his assistance on lengthening the start line and Sandy Powell for helping with RC! And as can be expected on Lake George,  the winds started to dwindle within 10 minutes of the start and stopped as the start was signaled.

At the start, Wild Thing’s proboscis was clearly over early and in the very light winds had to make a U-turn to clear the line. Unfortunately for the rest of the fleet there was insufficient wind to keep up the momentum generated during the last minute of the start sequence. A lot of boats were knocked backwards by some waves and obscured the mark for over 10 minutes. woot! finally cleared the line some 15+ minutes after the start not only contending with waves but the cluster of boats robbing them of any air movement across their sails. Meanwhile, Vaporize capitalized on the meager power generated by their main and coupled with the lightness of the hull drifted out to the front of the pack followed by Witch Way. About 20 minutes into the “floatathon” a very gentle breeze materialized out of the west. Animal’s spinnaker was first to appear followed by the cluster of J/24s within a few boat lengths.

It took about a minute for the chutes to fully draw but a few minutes later the sight was more in expectation of a sailboat race.

Vaporize, Witch Way, and Wild Thing (nice recovery!) had to wait for the breeze to cross the lake and watched the spinnakers close on them. But the wind steadied in strength and turned the float into a race. Vaporize rounded first, followed by Witch Way, Wild Thing and Animal.  As the time was ticking up past the 50-minute mark, the predicted shortened course was signaled. Vaporize carried the lead throughout the race but Witch Way  took the win on corrected time.

Congratulations to Alfie and crew for not only their win for the evening but on winning the first half series with just 12 points and taking 4/9 wins!

Complete results on lakegeorgeracing.com. Next week is the start of the second half series of 8 races. 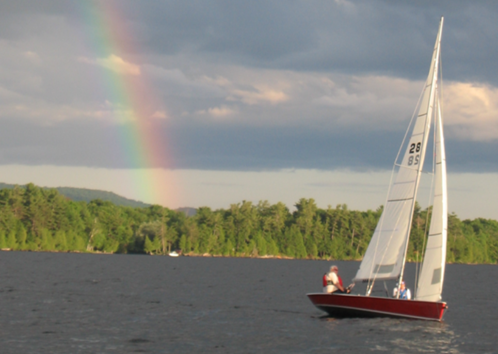 Thirteen boats, the largest fleet of the year so far, participated in last evening’s race. Welcome Fuzzy Logic and Stinger to the mix! With the fairly steady 8- to 10-knot winds out of the NE an I-5 course was set with the North Canoe government mark as the leeward mark, the start/finish line just to the north of Yankee and in line with the windward tetrahedron at 045o. At the start, Ed Gardner in Iko Iko tacked  to port right off the line while the rest of the fleet opted to stay on starboard for some minutes. With such clean air he quickly establish a top-tier position.

At the first mark Vaporize was first around with Iko Iko and Witch Way following. The chute on Vaporize failed to appear immediately and Witch Way and Iko IKo pounced, striking a course straight downwind towards North Canoe. The wind swung over to the west as the fleet sailed their first downwind leg, so the windward mark was dragged ~¼ mile west in an attempt to straighten out the course. The wind stayed fairly west up the second windward leg, giving the competitors a lengthy first tack. As they passed the start/finish line the wind swung back more to the north and Witch Way opted for a few short hitches to the west while Iko Iko seemed to just point straight at the mark. Witch Way had a narrow lead at the mark, though.

The cluster that followed had a significant deficit either in corrected time or distance. The wind went back to the NE as the two leaders were battling for an advantage. During the final leg, rainbows appeared in the eastern sky adding additional majesty to the lake view.

Swapping tacks up the final leg, Iko Iko gained a one-boatlength lead over Witch Way to cross the finish line first but Alfie and crew put another win on the board! Wild Thing crossed next, followed by Vaporize, but without the needed time margin to keep three J/24s from slipping into the top five. Animal took third for the night. Within a hundred yards of the finish, woot! on starboard tack crossed ahead of the very closely spaced Uncle Ludwig and Spirit, both on the favored port tack. Uncle Ludwig to leeward of Spirit had the easier course around woot!’s stern and beat Rodger and crew across the line. Unfortunately woot! needed to tack to cross the line and finished just behind Spirit.

Complete results, as usual, on lakegeorgeracing.com

Next week is our final race in the first half series. A second drop will be scored. Witch Way has a 7-point lead over Spirit. Uncle Ludwig in third needs two points to beat second-place Spirit in the series. Wild Thing is currently in fourth but still in the hunt for second or third.

Ten boats came out to race on a gorgeous Lake George evening. Shifting winds generally out of the NW posed some problems for the RC prior to the start. The original W4 with a tetrahedron had to be quickly rearranged to accommodate a huge shift to the west. As the RC boat moved up to Hogback reef with the ten-boat fleet following, Tom Selfridge made a mad dash up to the windward tetrahedron and dragged it both south and out farther into the lake to avoid the deepening wind shadow creeping onto the lake. The pin end and leeward mark was changed to the Hogback government mark and a quick look at the wind had the windward mark almost perfectly into the wind for the start. THANKS TOM!!!

Of the ten boats competing, nine heard the course information repeated via radio. Animal unfortunately was significantly over early and failed to clear the correct starting mark, otherwise they would have had a very impressive night. The rest of the boats all started well and the first leg saw many tacks up to the weather mark with the sportboats excelling. The lower velocity at the windward mark spread out the fleet.

At the second mark Brad Taylor opted for a very conservative takedown, allowing Wild Thing and Vaporize to close the distance, and woot! was not far behind. Witch Way was the top J/24 through all consecutive roundings.

As the fleet sailed towards the third mark the wind strength dropped, which spread out the fleet further. It was a night for the sportboats though, with Wild Thing, Brad Taylor’s J/80 and Vaporize crossing in that order for both line honors and points on corrected time as well — a first this year on Wed night.

Alfie and crew took fourth as the top J/24 for the evening. As the last of the J/24s completed the course Wild Thing started the process of rafting up. Cold adult beverages were soon passed around and a very boisterous raft-up followed with 7 out of the 10 boats rafting up to the committee boat. The wind picked back up to a gentle and steady northwest breeze as the sun started its slow descent behind the west shore mountains. Thanks to all who brought munchies to share!

This obviously successful social event need to be repeated! Please clear your schedules for another raft-up tentatively planned on July 13. The raft-up broke up towards 10 pm with the light dwindling in the western sky and the moon’s soft glow hinting over the eastern shore mountains.

Very light NNW wind at the start, the crew of Cut Loose acting as RC, and a short I-5 course set up with a windward tetrahedron and Hogback as the leeward mark. The wind filled in at the start, resulting in one of the shortest races of the season so far — Wild Thing took line honors in just over 31 minutes, but Spirit finished less then a minute later to claim the win, pushing Wild Thing to second and J/80 69 third, both across the line and on corrected time. See complete results.

Nine boats competed in the fifth race of the season under grey clouds and cooler than normal temperatures in a gusting and shifting WNW wind. The start line of the W6 course was set slightly north of Long Island with the weather mark set at 3200.  As the fleet approached the starting area the wind suddenly increased and most of the J/24s opted for a headsail change as the RC waited for the last boat to sail across the lake. And we witnessed a sight not seen in many years: a Star headed out of the Lake George Club to compete. Welcome Iko Iko, skippered by Ed Gardner. At the start Cut Loose and Spirit had the line virtually uncontested with most boats opting for the boat end of the line but several seconds late.

The shifting winds favored Uncle Ludwig’s southerly route to the weather mark and Kyle and crew rounded first with Wild Thing popping their chute next. Ed Gardner in the Star followed, sailing deep with the mast butt cranked aft. Several boats opted to not fly their spinnakers in the gusty high winds that prevailed for most of the first four legs. At the leeward mark Uncle Ludwig had a clear lead with the Iko Iko and Wild Thing following. Spirit and Witch Way were swapping tacks and on the upwind leg the winds shifted more to the west. The RC moved the leeward mark several hundred yards to the north in an attempt to square up the course. As the evening progressed the winds started to abate, allowing some of the J/24s to swap back to their genoas. On the final leg, Uncle Ludwig had a major wrap of their chute during a gybe. Wild Thing crossed first for line honors, followed by Iko Iko. Uncle Ludwig, Witch Way and Spirit had sufficient time on the faster boats to capture the top three spots for the night.

I would like to thank Nelson Snowden for assisting on the RC boat last evening. Next week John Dickinson and the crew of Cut Loose will host the evening’s race.